Building Am I Job Ready 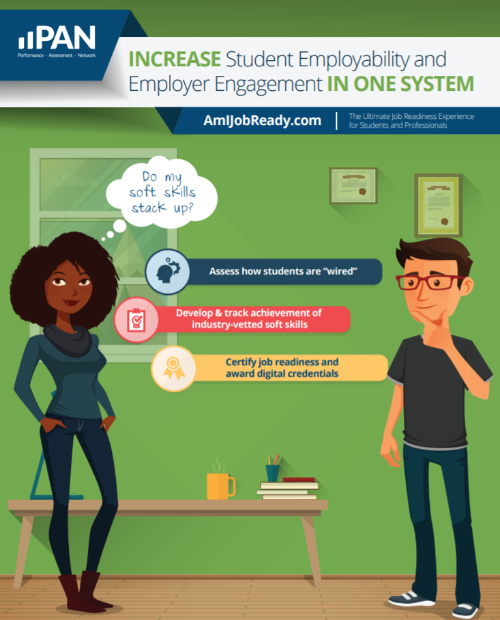 How many times did you visit your college’s career office or use one of its services? I thought so! In 2016, I had the opportunity to do something about this. While VP of Marketing for a pre-hire assessment company, I convinced our CEO and PE firm to give me 6 months of development resources to build a soft skill program for college students. Lots of universities were offering (or trying to) classes on topics like leadership, reliability, creativity, and resilience, but a surprising number didn’t have great content ready for students. Our idea was to build a 16-module employability skills curriculum that high school and college students could go through on their computer or tablet in 1-2 hours a week for a semester or as part of a student or career success class.

To get the idea off the ground, I asked one of our senior salespeople to be my Sales Director and got the approval. He and I started meeting daily with our I/O psychologist and engineering teams to build out the basic user wireframe and MVP product. The content build consisted of 16 videos, situation judgement scenarios, and final quizzes to test if a student understood how to apply each skill. Such as could they show what it meant to display creativity in a project or marketing team, or what reliability or integrity looked like given 2-3 common scenarios. After about 90 days, we had a product that was ready to show. We immediately started gaining traction which was a great sign! The catalyst was attending a regional career counselor conference in Chicago where we surveyed 60 schools and 20% said they’d love to pilot it. Most of the counselors were already using career tests to guide students toward their natural career fit, but they hadn’t seen an off-the-shelf soft skill program this good before.

Building excitement for a pilot was one thing, but getting those customers to cut checks was another. I scheduled meetings with the closest 4-5 major universities including Purdue, Butler, and U of Michigan and within a month, Purdue was ready to sign a contract. They had been trying to get a leadership skills badging initiative off the ground and saw our platform as their easy-button option. My final selling point was “we’ll get you 80% there by next week and you can stew over the final 20% throughout the next year.” It’s a pitch I’ve used often in my career to spur action. Within another 90 days, we had signed up a half-dozen schools, including landing our biggest deal with Ivy Tech Community College. Ivy Tech wanted to scale a career engagement and reward program to all of their 80,000 students. They would use our content out of the box and build a reward system around it. Students who watched four of the videos and passed the quizzes would get a branded leather notebook; those who completed all would get backpacks, etc. They even built a cool workplace skills learning rubric around our modules. The Ivy Tech roll-out would be one of the largest employability projects of its kind.

Within a year of our launch, over 30 colleges (mostly community colleges) were responding to our emails and phone calls and had purchased a campus license. Many more were asking for pilots. This was an amazing time in my professional life and I’m proud that we helped over ten thousand students identify their strengths while learning vital soft skills.